Pangasinan was among the earliest political and administrative units in the Philippines. It was officially conquered and colonized by D. Martin de Goiti in 1571. On April 5, 1572, Pangasinan was made an encomienda by the Spanish royal crown to receive instructions on the Catholic faith, which means that Pangasinan was organized under one leadership and has identity before the Spanish Royal Court.  Eight years later, in 1580,   Pangasinan  was  organized into a political unit under an alkalde mayor who at that time has authority as head of the province or provincial government with judicial function indicating that Pangasinan has become a province. To commemorate the day when Pangasinan became an encomienda and the year it became a province, Pangasinan celebrates April 5, 1580 as the official founding day of the Province of Pangasinan. At that time, its territorial jurisdiction included the Province of Zambales and parts of La Union and Tarlac. By the middle of the  19th  century  however,  the  northern  towns  of  Agoo to Bacnotan were  separated from the  province and became parts of La Union. The provincial territory was further diminished in 1875 with the annexation of Paniqui and other towns south of it to Tarlac.

Pangasinan,  derived its  name  from  the  word  “panag asinan” , which means “where salt  is made”, owing to the rich  and fine  salt  beds  which  were the prior  source of  livelihood of the province’s coastal towns.

This section presents data on the province’s physical and natural resources, including its climate and natural hazards/constraints, necessary in the formulation of policies and programs about a more effective environmental protection and resource utilization.

Pangasinan is considered as a major gateway to the Ilocos and Cordillera Administrative Regions. It occupies the northern portion of the central plains of Luzon with an east-west configuration that extends into a peninsular form jutting into the South China Sea. It is bounded in the North by the Lingayen Gulf, La Union and Benguet, Nueva Vizcaya in the Northeast, Nueva Ecija in the East, Tarlac in the South, and Zambales and China Sea in the West. It is about 170 kilometers north of Manila and about -59 kilometers southwest of Baguio City. 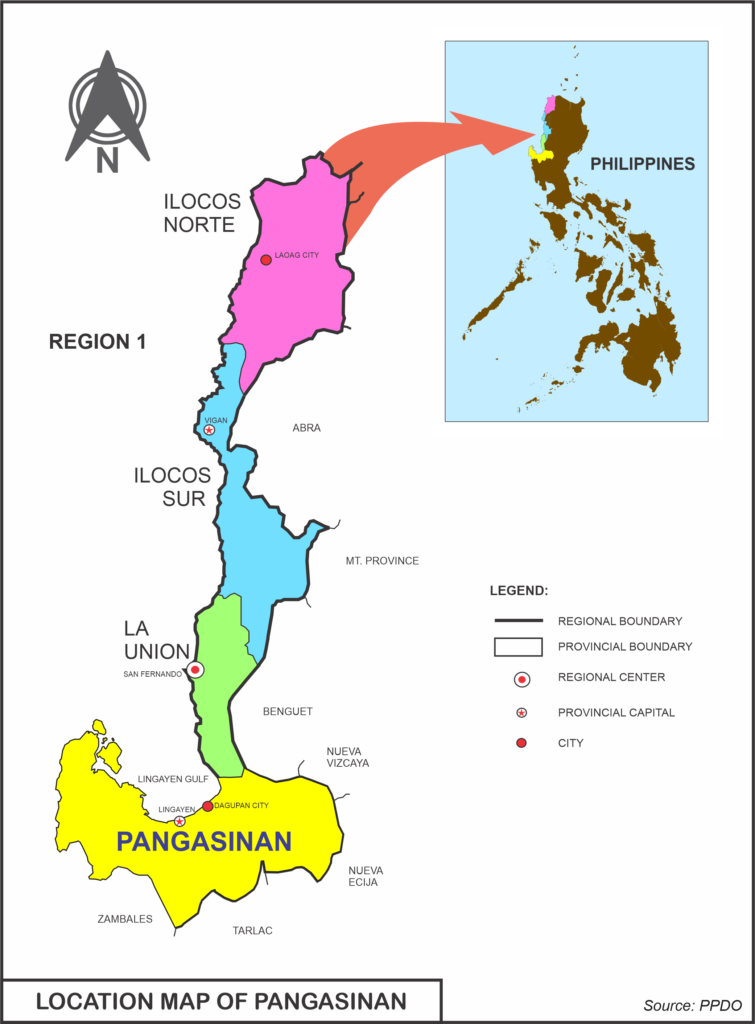 Pangasinan is comprised of 44 municipalities, 4 cities and 1,364 barangays. It has six (6) Congressional Districts with Lingayen as the Provincial Capital. 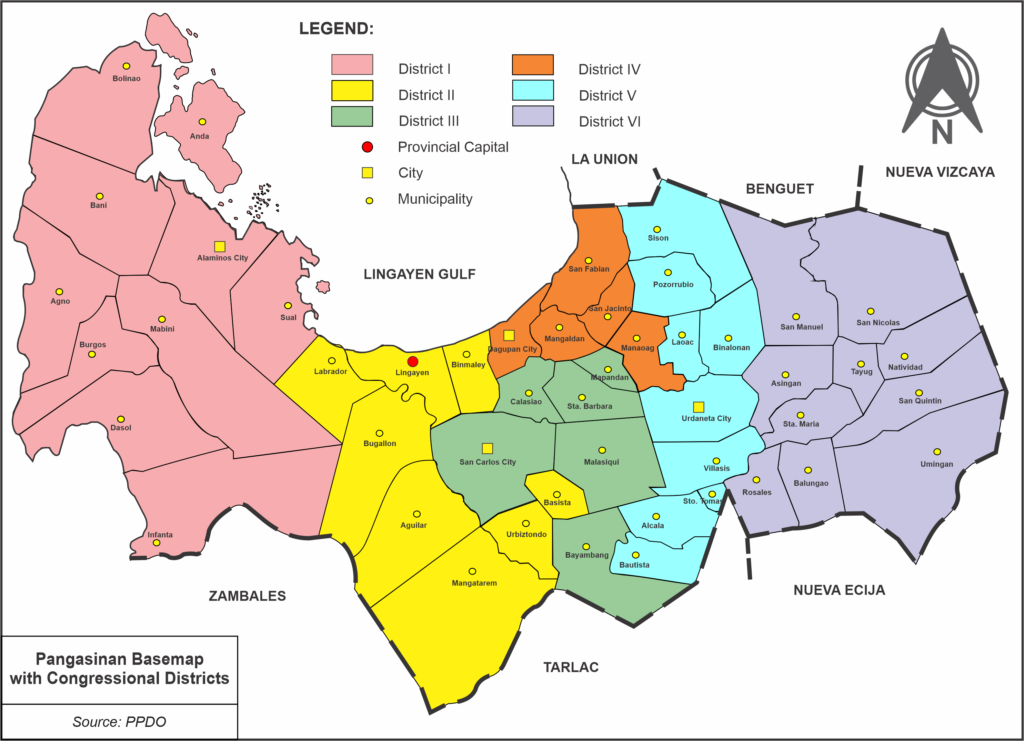 The province’s land area is generally level to undulating to rolling with the hilly and mountainous portions concentrated in the western and eastern part. 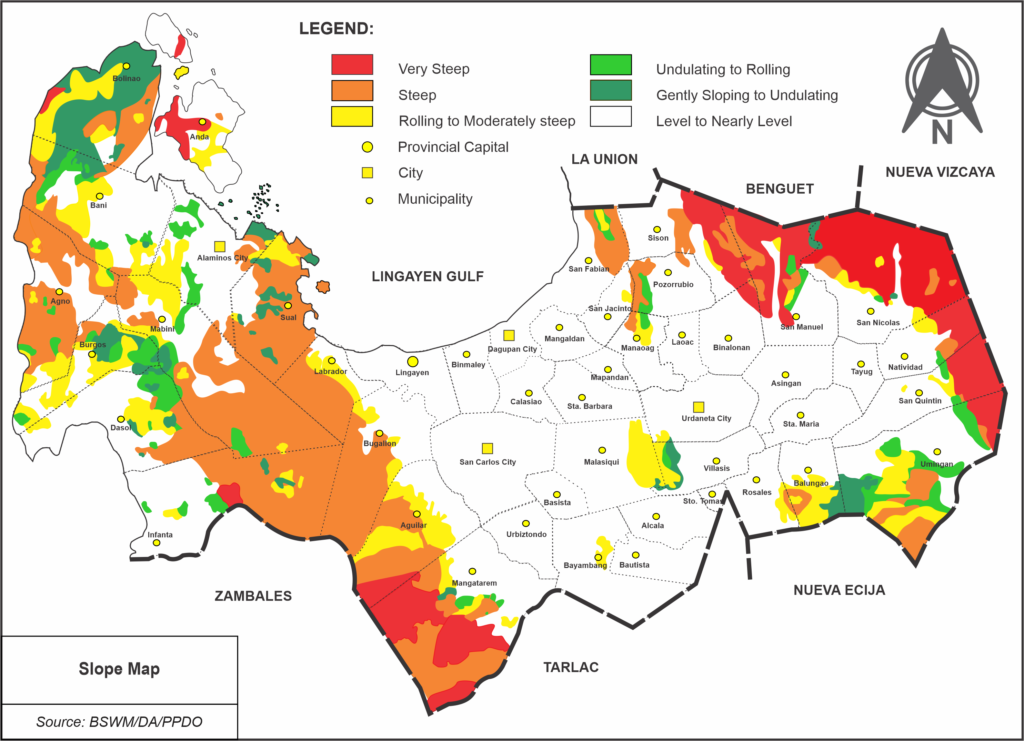 The province is generally underlain by thirteen (13) distinct rock formations, which set limitations of varying degrees to land development particularly to horizontal and vertical structures, to wit: 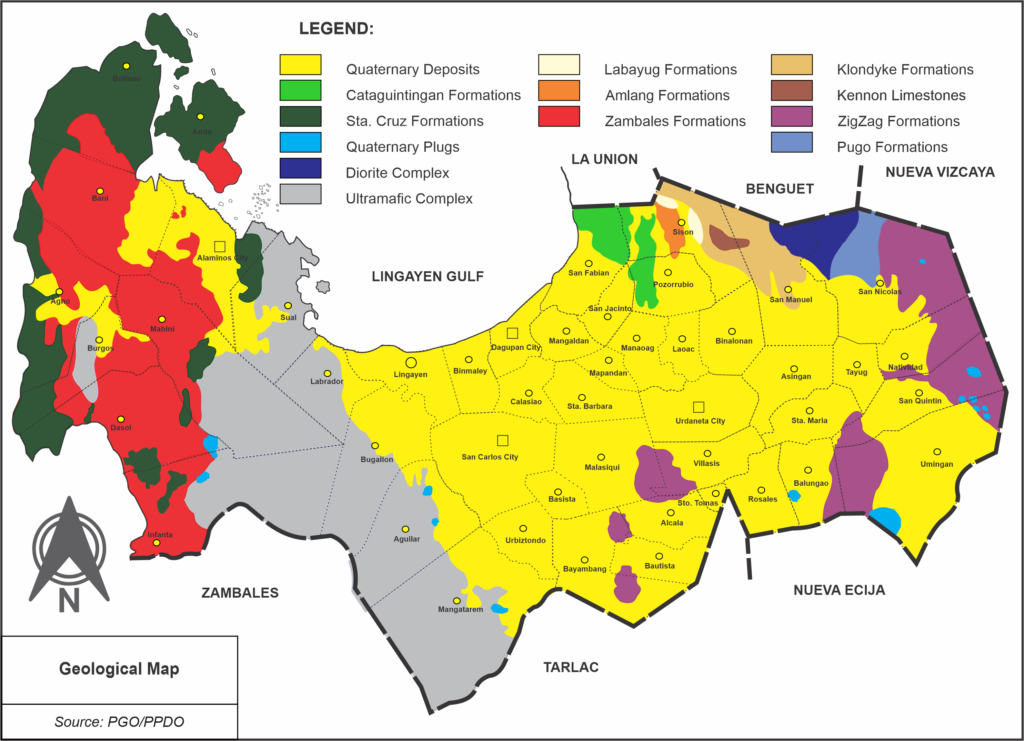 On the province’  soil types, the mountains of the eastern and western parts of the province consist mostly of various types of clay loam, while the soils along the rivers, especially the Agno River and its tributaries, is made up mostly of Fine Sandy Loam, Fine Sand and River Sand. 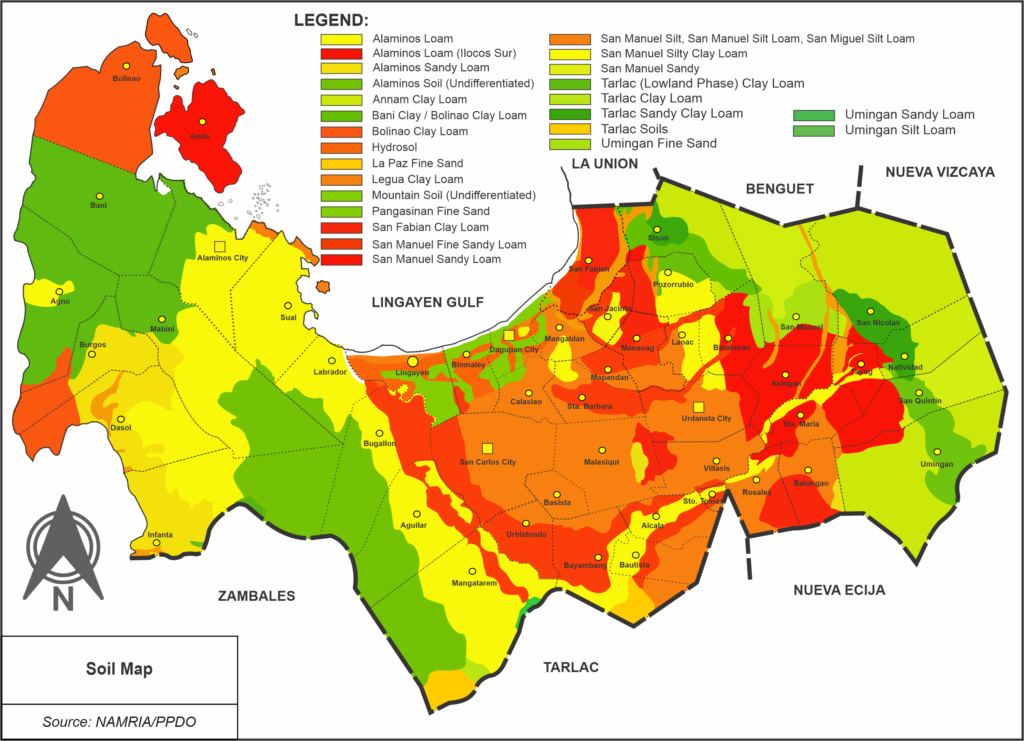 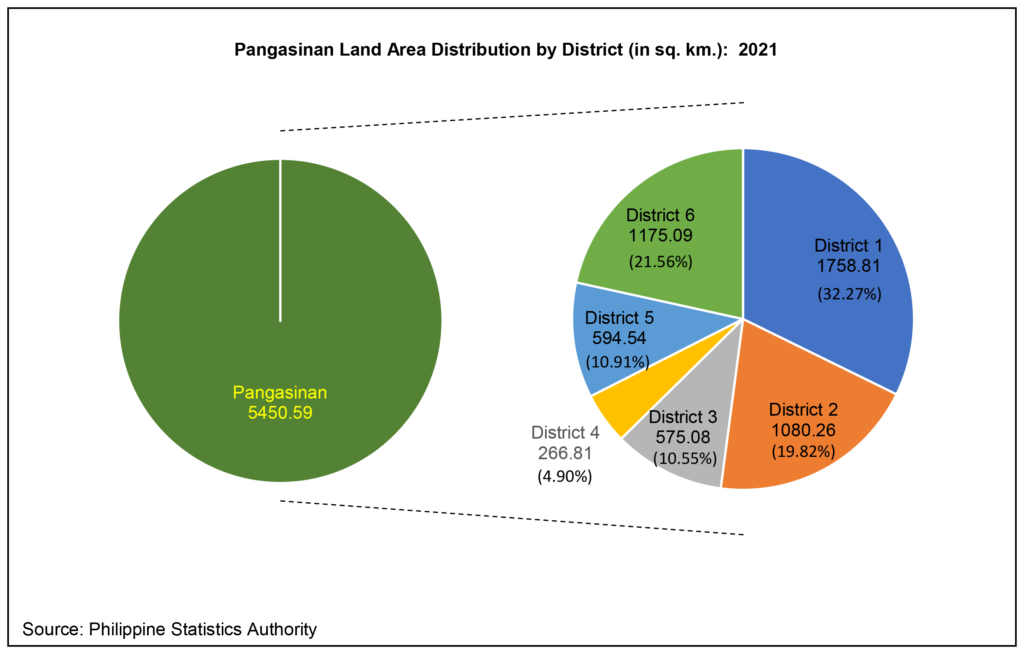 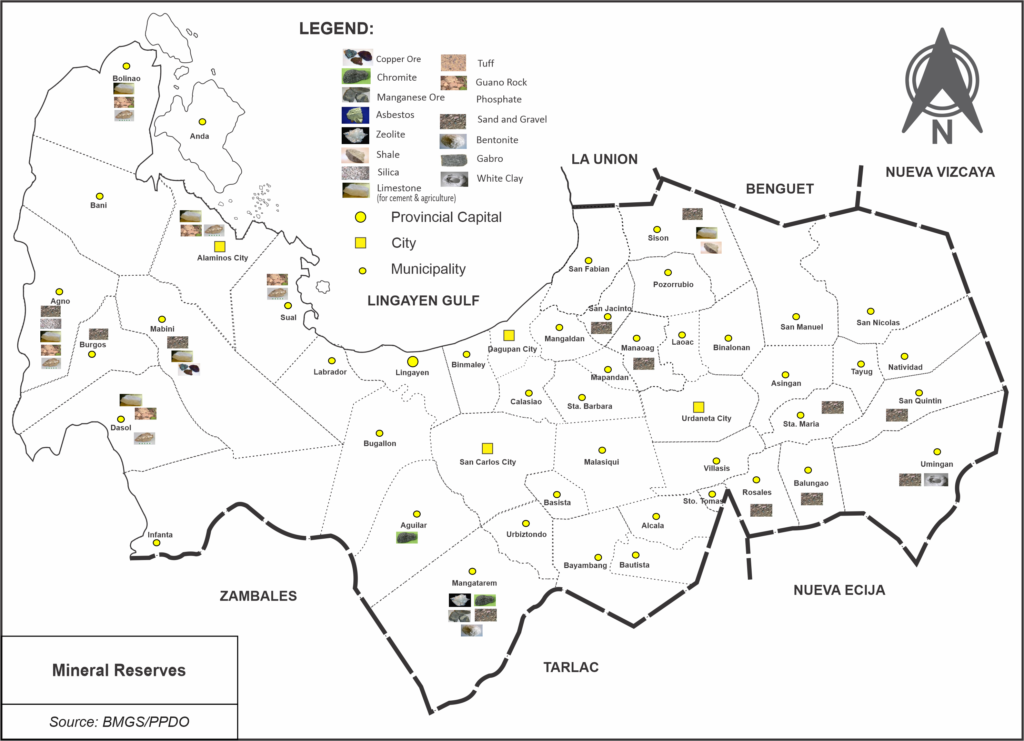 The coastal areas of Pangasinan, especially the Lingayen Gulf, is rich and major fishing ground in Northern Luzon. It encompasses a total length of 285.66 linear kilometers which is about 40.34% of the region’s total length of coastline (708.165 kms) and 0.80% of the Philippine coastline (36,289 kms).

The province has fourteen (14) coastal municipalities/cities comprising of 123 barangays, with the Municipality of Anda having the longest coastline covering an approximately 55.794 kms or about 19.5% of the total province’s coastline.

Ground Water is the principal source of water supply for household consumption in the province, which comes primarily from the headwater and tributaries of the Agno River. 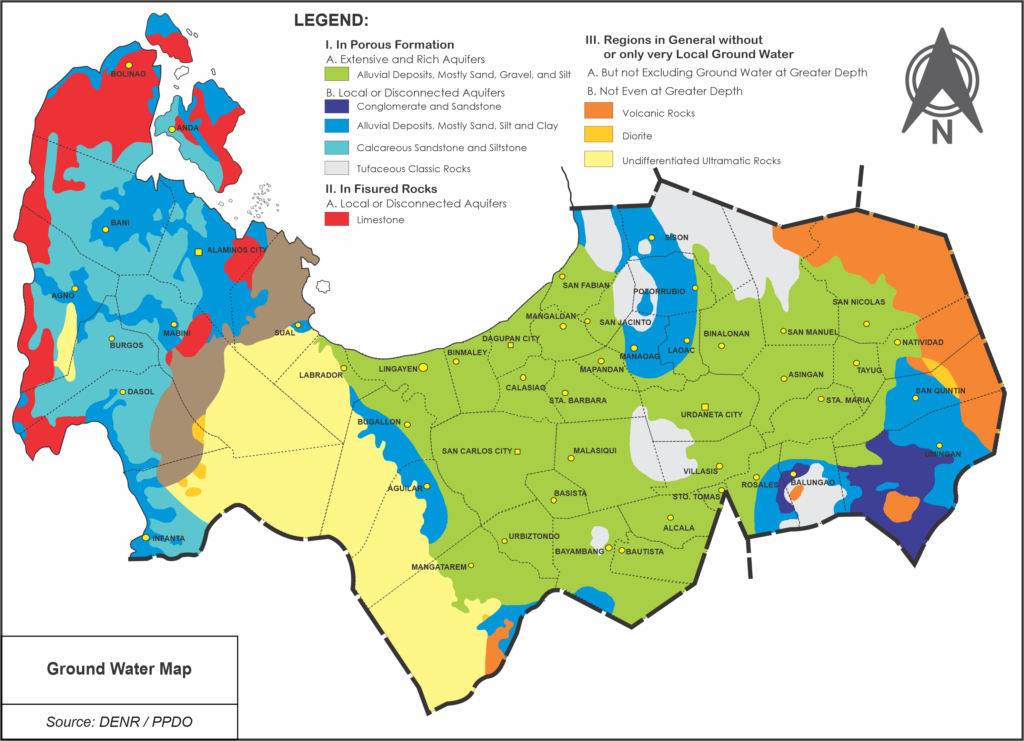 The province is drained by nine (9) major river systems, the longest of which is the Agno River having a length of about 270 kilometers. 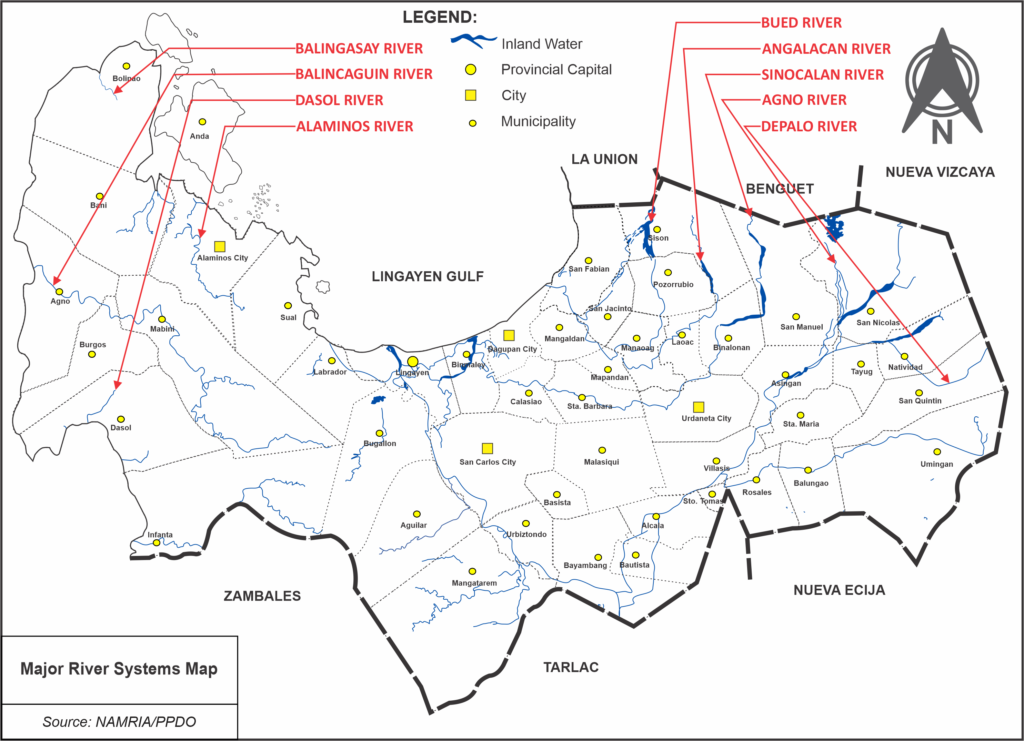 The province has a tropical climate dominated by a wet or rainy season and dry season. The average annual rainfall is 170.4 millimeters, with the month of July having the highest amount of 519.4 millimeters. 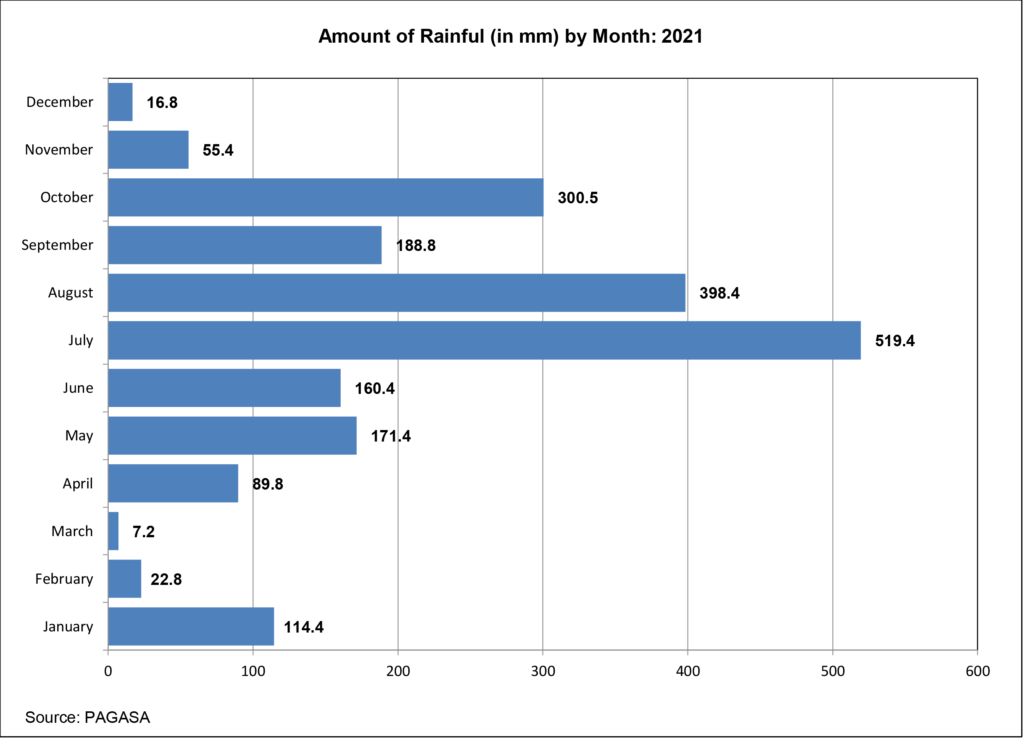 The province is traversed by numerous active faults thereby placing under constant strain and pressure resulting from rock displacement and earthquake. Fault Zones, the solid lines, denotes that the trace of the fault is already certain and is evident at the normal fault along the Labrador to San Clemente, Tarlac fault line. On the other hand, the dashed line as seen on the Pozorrubio to Umingan left lateral fault and the San Quintin to San Nicolas normal fault denotes that the traces of the fault are approximate. 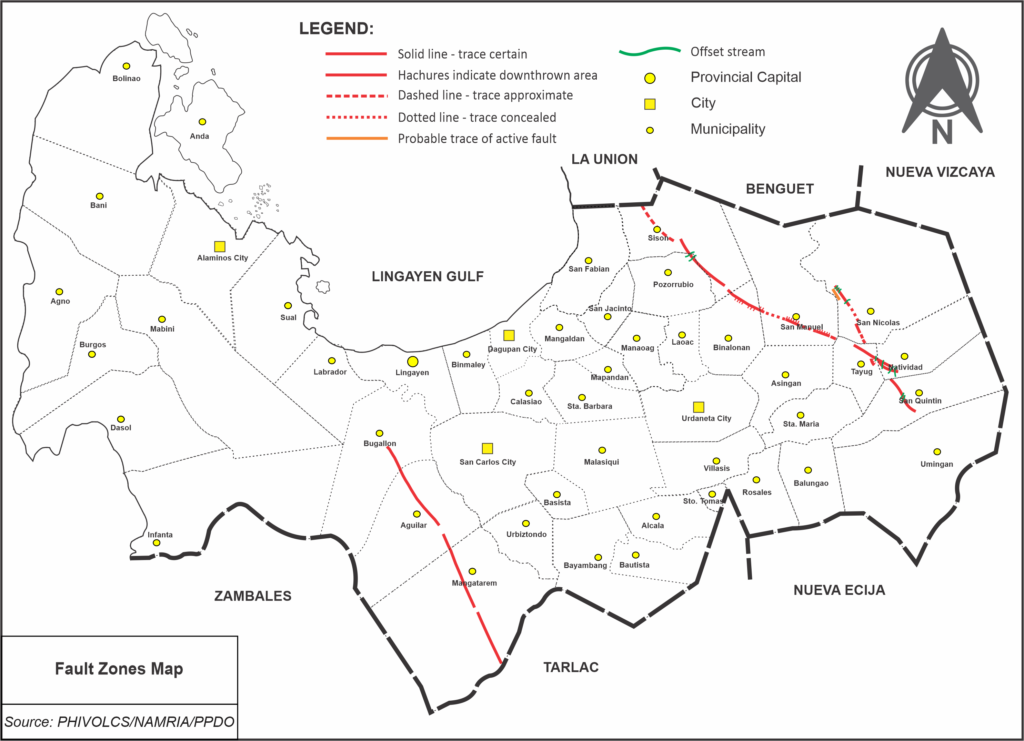 Areas traversed by the major rivers, mostly in central and eastern part and some coastal areas in the west are susceptible to flooding and storm surge, while areas prone to landslide and severe erosion are mostly situated in the mountainous areas of Western and Eastern Pangasinan. 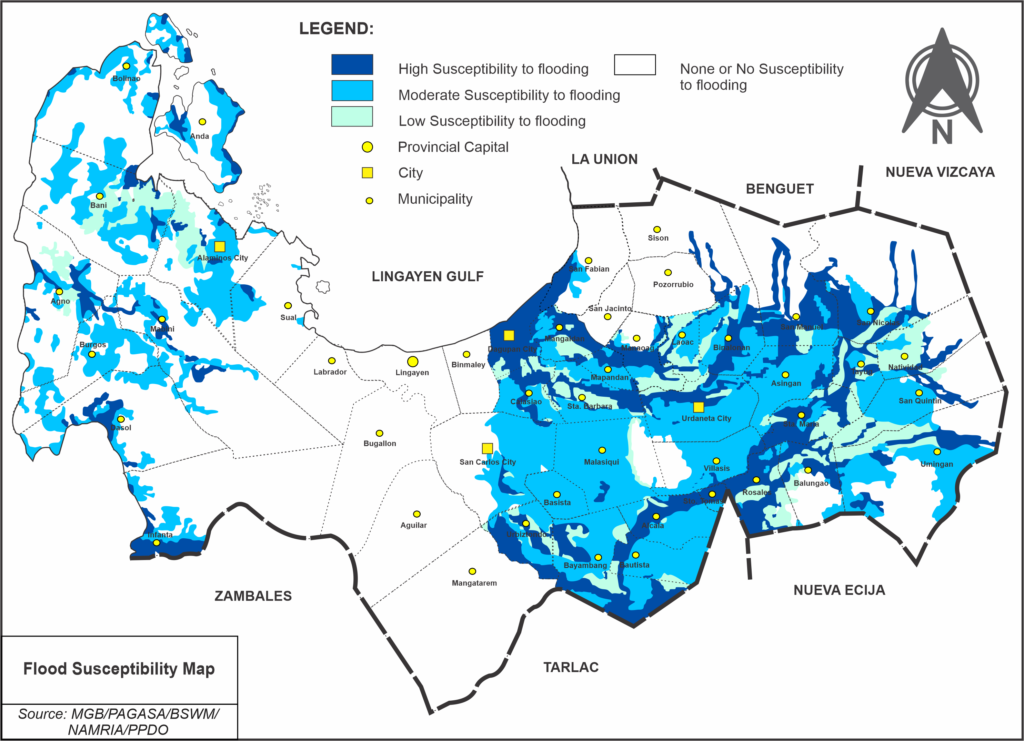 The highly susceptible areas for rain-induced, and earthquake-triggered landslide are located in the mountainous areas of the province, mostly in the eastern and western part. 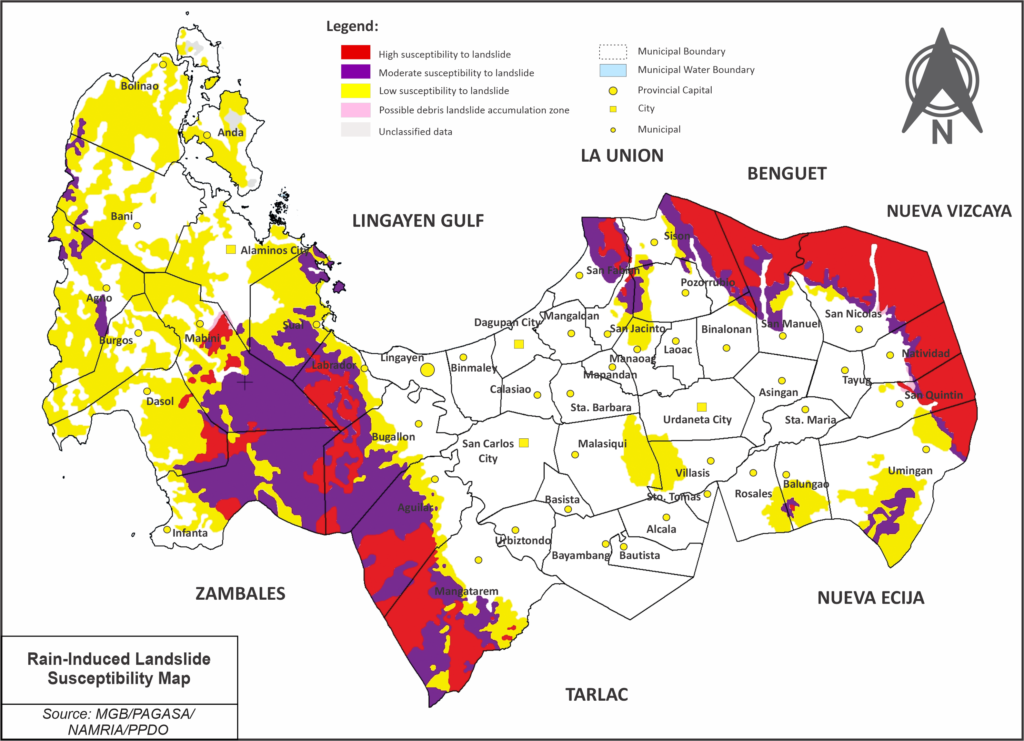 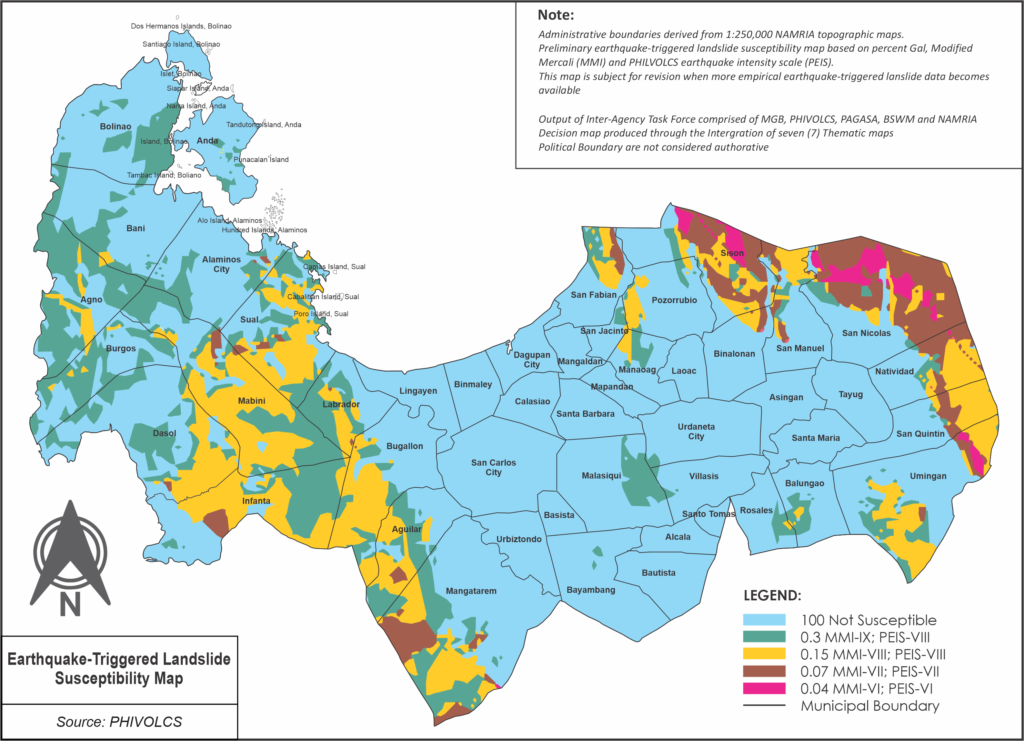