The top ten (10) palay producing municipalities/cities are mostly situated in the central and eastern part of the province. Municipality of Umingan recorded the top most producer of palay in the province with a total production of 111,915.55 MT. Followed by Mangatarem, Urdaneta City, Villasis, Aguilar, San Manuel, San Carlos City, Sta. Barbara, Asingan and San Quintin. Pangasinan remains the top 3 palay producer nationwide as per PSA data. 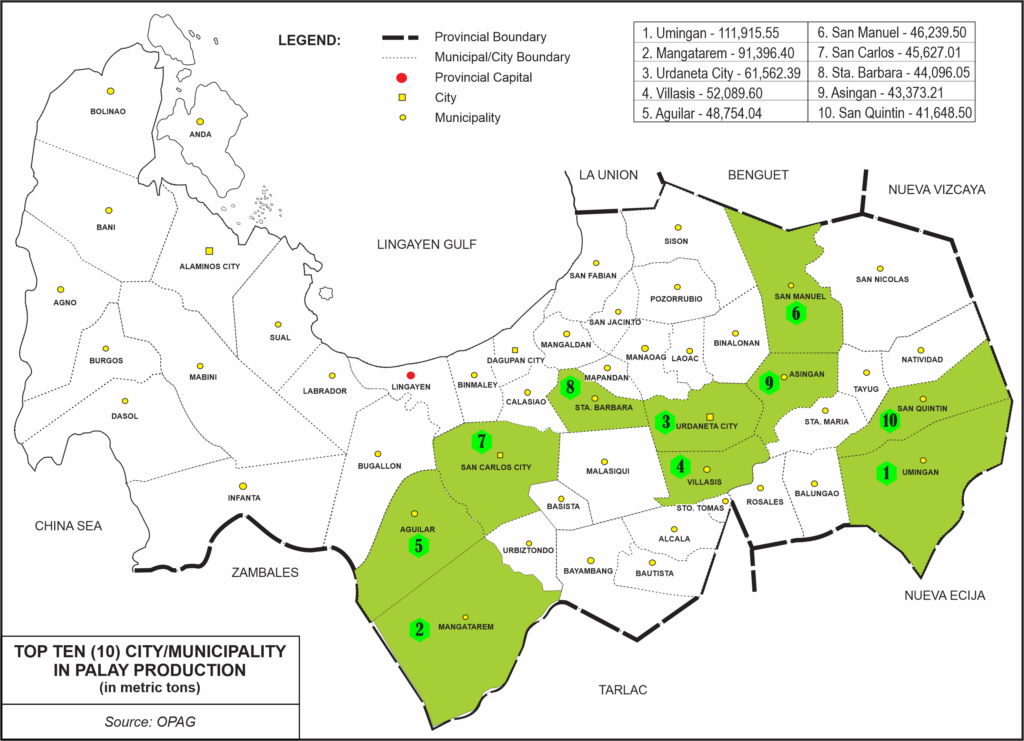 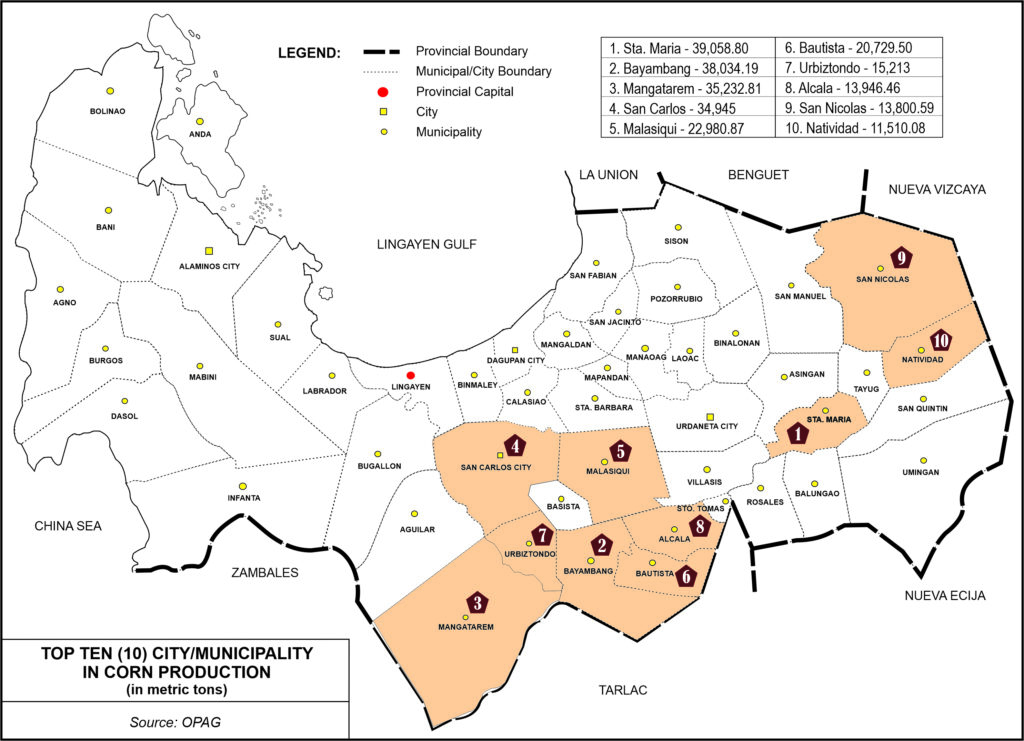 The total mango production of Pangasinan for CY 2021 is recorded at 76,083.40 MT as reported by the Provincial Agriculture Office. The top ten (10) mango producing municipalities/cities are mostly found in the central and eastern part of Pangasinan. 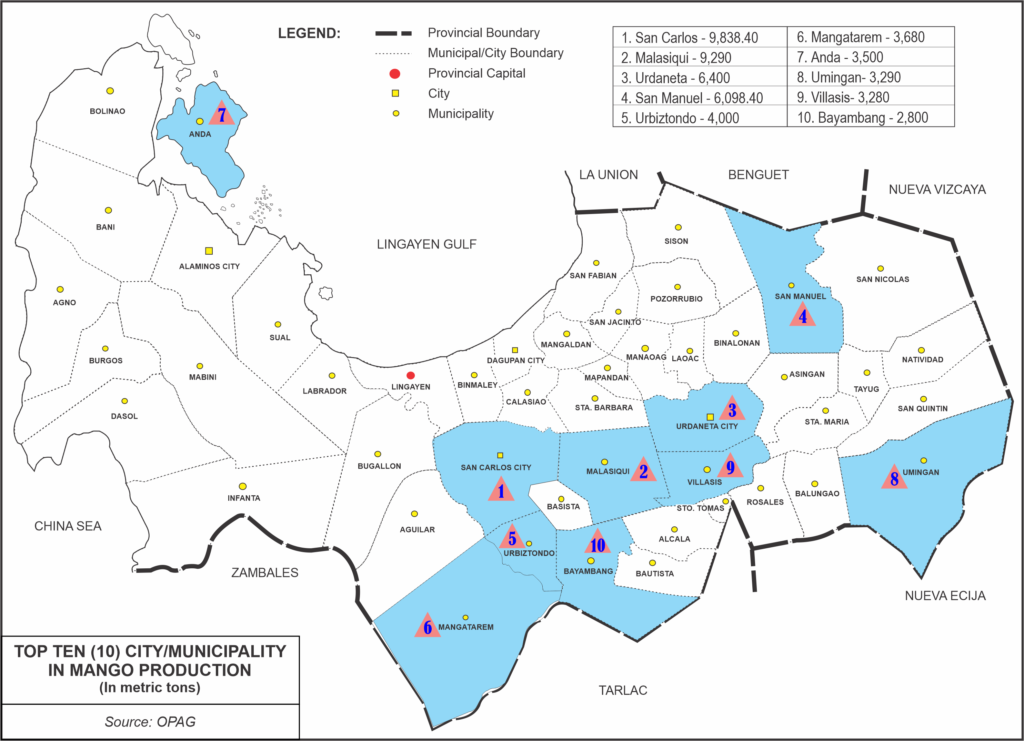 The province has a total number of 170,630 farmers cultivating an area of 187,844.86 hectares. There are 58 agrarian reform communities in the province covering 329 barangays with 37,811 Agrarian Reform Beneficiaries, cultivating a total agricultural area of 95,943.8252 hectares.

To ensure forest protection and uplift the socio-economic condition of upland farmers, activities such as reforestation, agro forestry and fuel wood/fruit tress plantation are being undertaken by about 1,701 beneficiaries under the Integrated Social Forestry (ISF) occupying an area of 2,911.67 hectares in the 38 barangays of Western and Eastern Pangasinan as of CY 2020 data.

There are 20 ice plants and cold storage facilities operating in the province which primarily cater to the preservation needs of fish traders or viajeros.

The province has a total number of 13,762 micro small and medium enterprises (MSMEs), which have decreased by about 1.6% from last year’s 13,981. The total number consists mostly of micro enterprises whose income is Php 3M and below.

Manufactured products such as processed foods, furniture and wood products and metal crafts are considered as the leading industries in the province having a value of exports amounting to US$ 0.0391M.

The province has a total of 41 registered Call Centers / Business Process Outsourcing or BPO as of CY 2019.

There are 1,063 Financial Institutions operating in the province, under the Bangko Sentral ng Pilipinas. Pawnshops and Money Service Businesses have the most number with 681 (64%), followed by various types of bank with 369 (34.7%), and non-Banking institutions with 13 (1.22%). From this financial institutions, some 422 automated teller machines (ATM) are strategically installed within the province.

Based on the Provincial Tourism, Culture and Arts Office, the survey of tourist arrivals based on accommodation establishments registered a total of 224,524 tourists, both domestic and foreign. On the other hand, the survey of day tourist based on tourist destinations, accounted for some 1,157,210 domestic and foreign tourists, which are dominated by the Manaoag Pilgrims and Bolinao beaches, with at least 50% of the total number of day tourist.

There are a total of 684 Accommodation Establishment (AE’s) in the province which employs about 4,124 employees. The establishments have a total number of 7,094 rooms which can accommodate a maximum of 30,582 persons per day. District I has the highest with 421 AE’s, followed by District IV with 78 AEs.