The top ten (10) palay and corn producing municipalities/cities are mostly situated in the central and eastern part of the province. 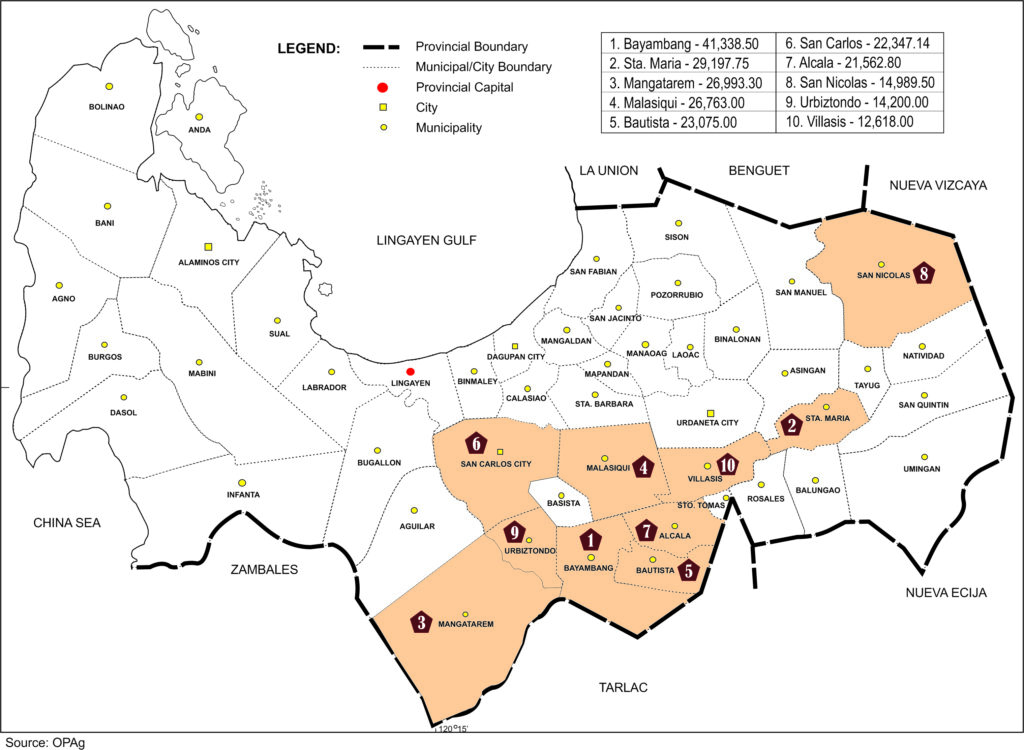 The fruit production on banana, mango, papaya and watermelon has an increase of 16% from the previous production of 112,873.95 MT (2018) to 131,047.15 MT. Mango remained to be the biggest contributor in the total fruit production in the province contributing almost 83%.

Top ten (10) mango producing municipalities/cities are found in the central and eastern part of Pangasinan.

The province has a total number of 174,083 farmers cultivating an area of 183,596.87 hectares. There are 58 agrarian reform communities in the province covering 329 barangays with 35,541 Agrarian Reform Beneficiaries, cultivating a total agricultural area of 95,943.8354 hectares.

To ensure forest protection and uplift the socio-economic condition of upland farmers, activities such as reforestation, agro forestry, fuel wood/fruit tress plantation are being undertaken by about 1,701 beneficiaries under the Integrated Social Forestry (ISF) occupying an area of 2,911.67 hectares in the 38 barangays of Western and Eastern Pangasinan.

There are 20 ice plants and cold storage operating in the province which primarily caters to the preservation needs of fish traders or viajeros.

In 2018, support facilities for various crops include 333 rice mills, 351 warehouses and 3 mechanical dryers. Majority of these post-harvest facilities are located in District I.

In addition, there are 1,345 grains establishment, about 40% of which are retailers, 44% are on retail/wholesale and, almost 16% fall under wholesale classification.

The province has a total number of 14,931 micro, small and medium enterprises (MSMEs), which have increased by more than 25% from last year’s 11,930. The total number consists mostly of micro enterprises whose income is Php 3M and below.

Agriculture, Forestry and Fishing, and Manufacturing Industry Sectors are considered as the leading industries in the province having a value of exports amounting to US$ 0.301M.

The province has a total of 41 registered Call Centers/Business Process Outsourcing or BPO.

There are 858 Financial Institutions operating in the province, under the Bangko Sentral ng Pilipinas. Pawnshops have the most number with 362 (42%), followed by various types of bank with 335 (39%), Remittance and Transfer Companies/Money Changers/Foreign Exchange Dealers with 148 (17%), and non-Banking institutions with 13 (2%). Also, some 379 automated teller machines (ATM) are strategically installed within the province

Based on the Provincial Tourism, Culture and Arts Office, the survey of tourist arrivals based on accommodation establishments registered a total of 804,433 tourists, both domestic and foreign. On the other hand, the survey of day tourist based on tourist destinations, accounted for some 10,075,891 domestic and foreign tourists, which are dominated by the Manaoag Pilgrims, with more than 81% of the total number of day tourist.

There are a total of 510 Accommodation Establishment (AE’s) in the province which employs about 3,079 employees. The establishments have a total number of 5,700 rooms which can accommodate a maximum of 26,866 persons per day. District I has the highest with 279 AE’s, followed by District IV with 69 AEs.