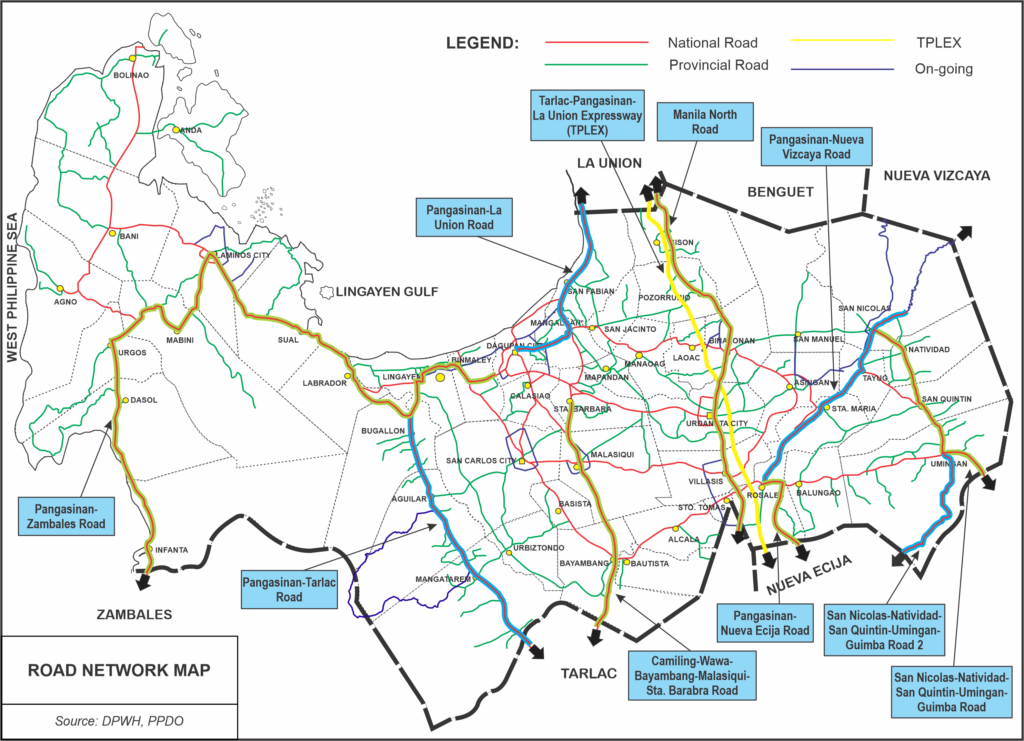 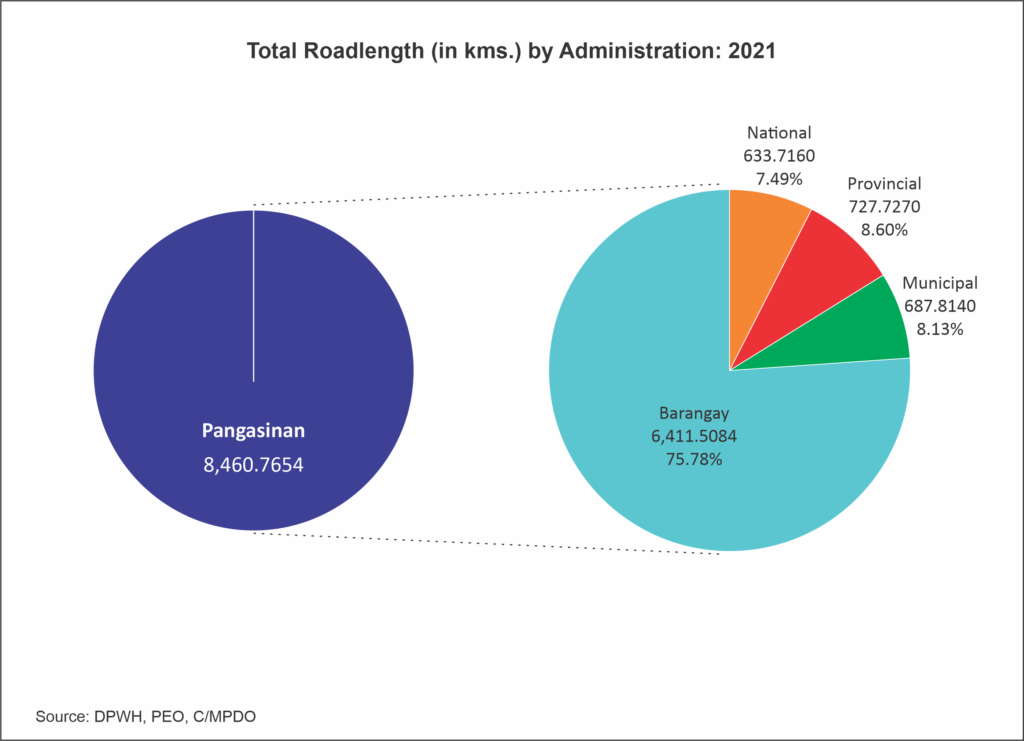 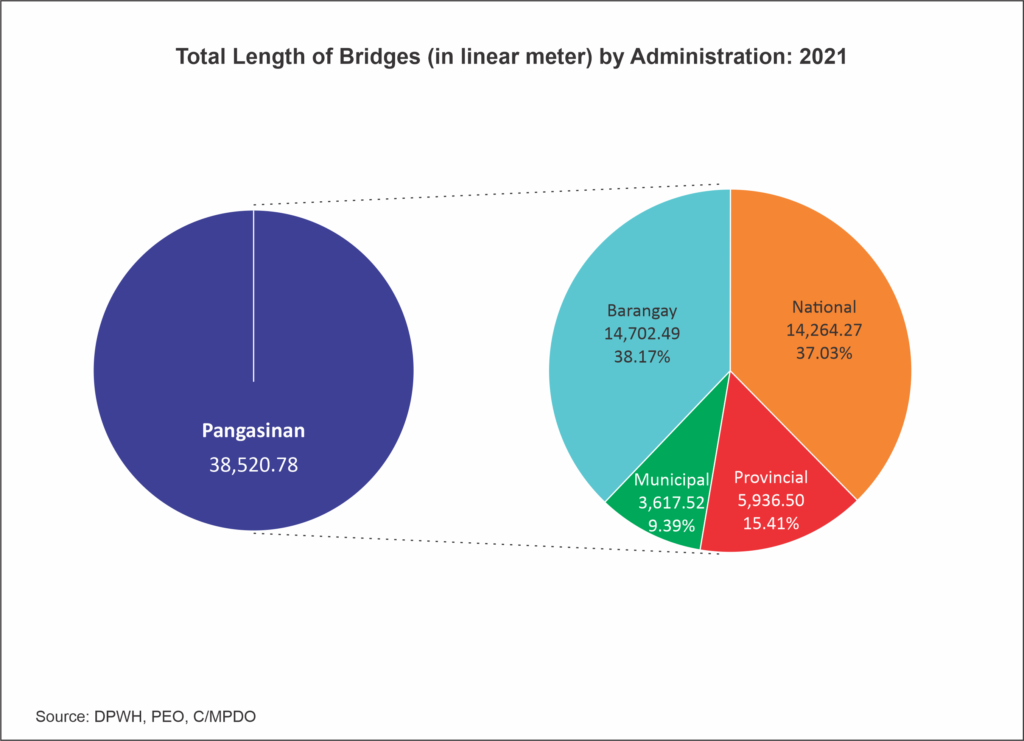 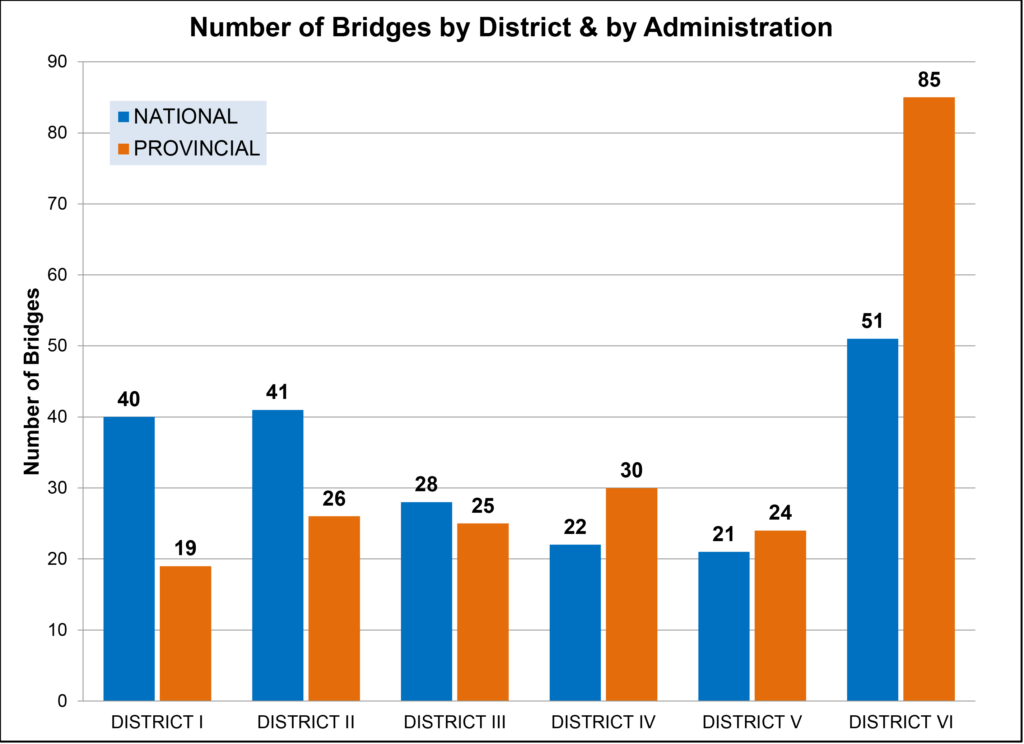 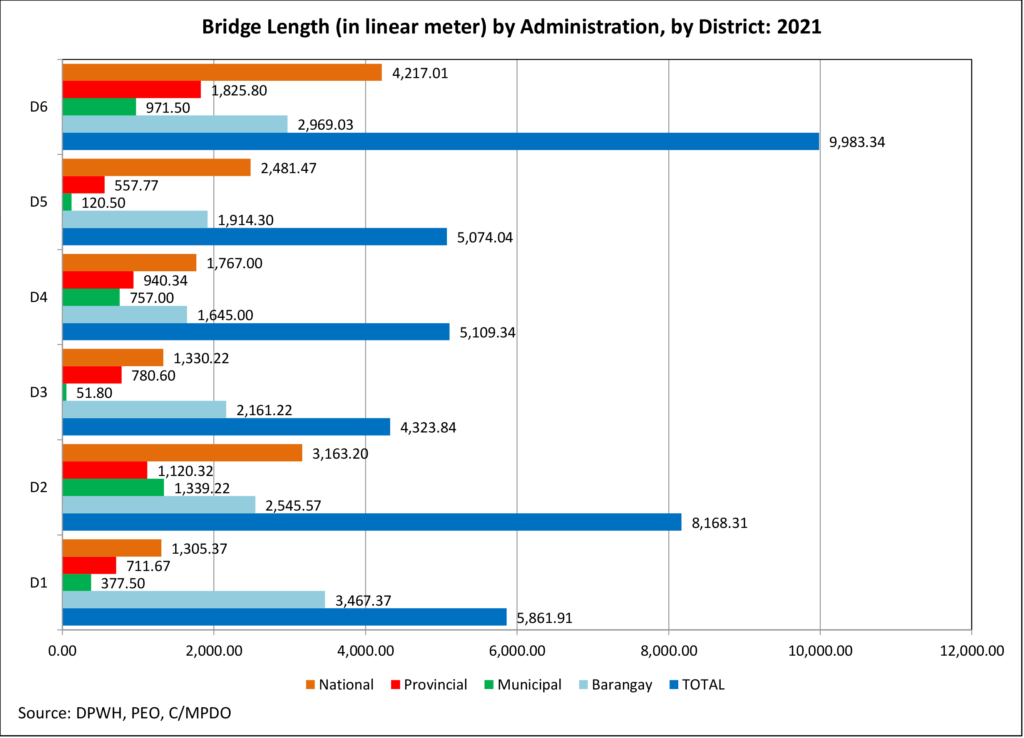 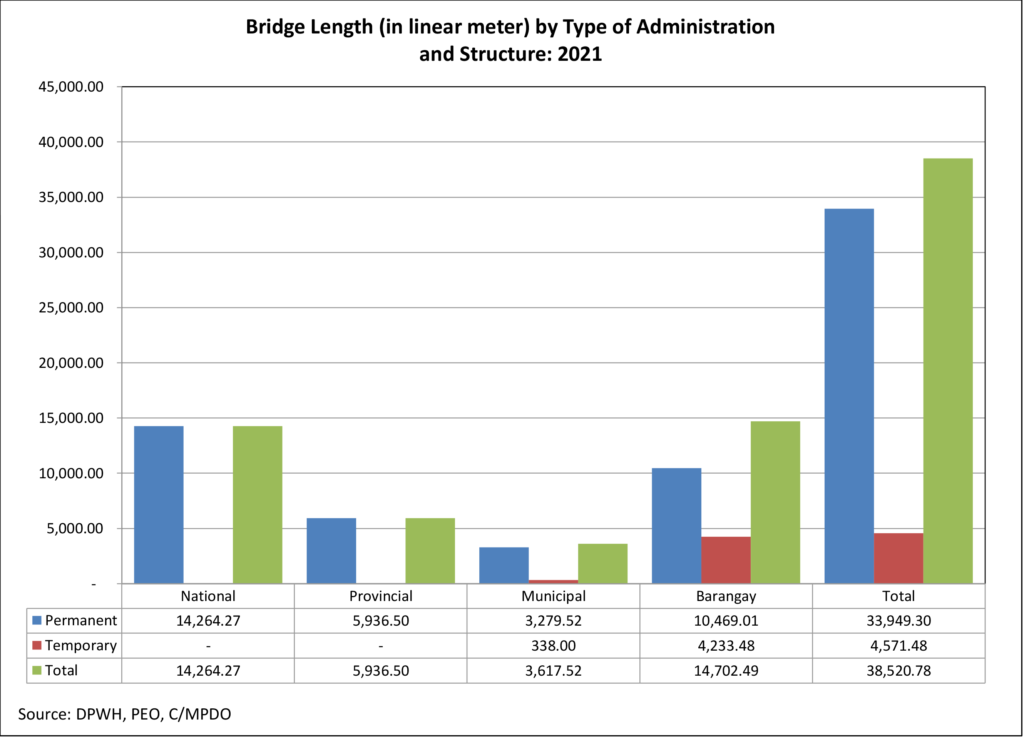 For the year 2021, the irrigation coverage of the province was placed at 60% representing 111,429 hectares irrigated from the potential irrigable area of 185,757 hectares.

Potable water supply is being served by the 48 water districts/waterworks associations and privately-owned water associations located in different parts of the province categorized into residential, commercial and industrial. Residential had the highest connections with 249,195, an increase of 6.30% or 14,771 connections over the previous year’s figure of 234,424. Meanwhile, commercial and industrial/government had 14,063 and 2,138 connections, respectively. 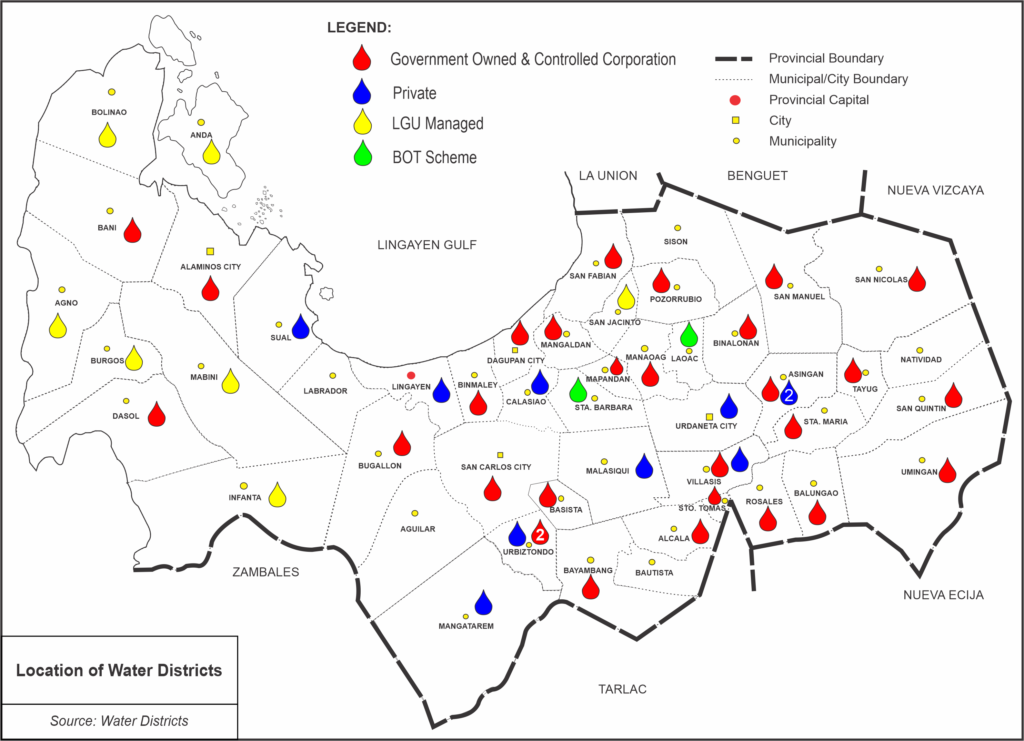 The province has 2 power generation plants, the Sual Coal-Fired Power Plant and the San Roque Hydro Power Plant located in the municipalities of Sual and San Manuel, respectively. These power plants have a combined generating capacity of 1,653 MW and have several transmission lines carrying high voltage of 69 KV, 230 KV and 500 KV. 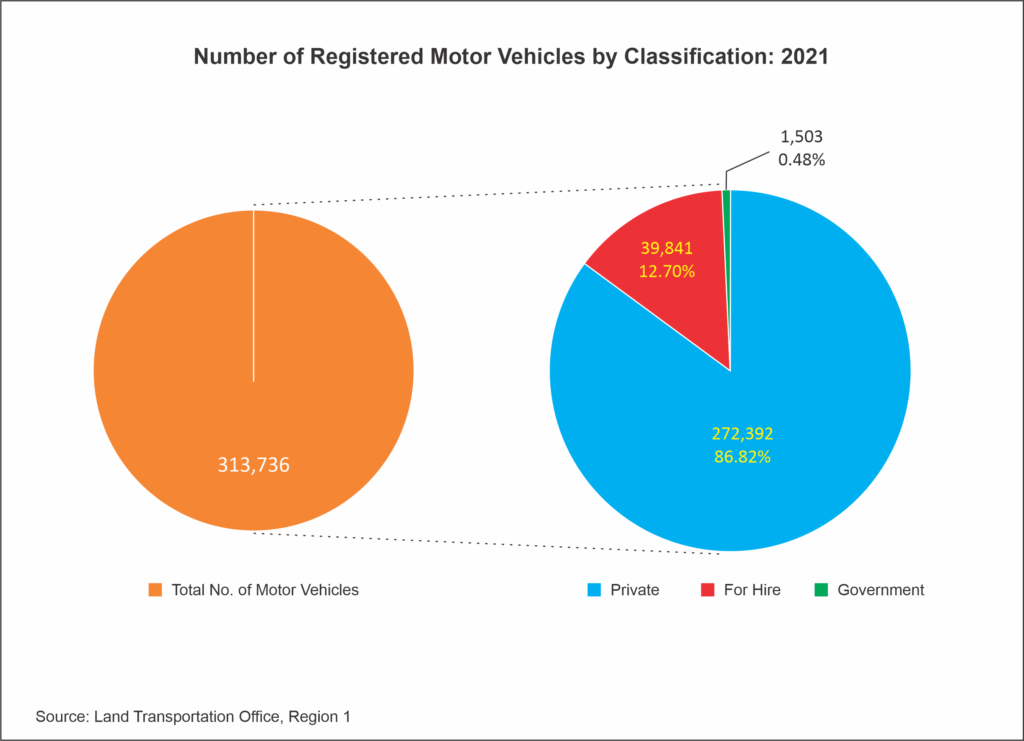 In 2020, the postal services are being provided by the 50 post offices giving more than 100% coverage for the province. For the year under review, one (1) post office served 62,744 individuals. For the same period, there are 107 letter carriers in the province, serving 29,319 persons per letter carrier. The ratios of both the post office and the letter carrier to population are below the standard ratio of 1:6000 and 1:5000, respectively.

Print media and local news are mediums of information. In the province there are 19 print local publications being circulated. Also, there are 19 existing cable stations and 19 broadcast/radio stations that are currently in operation.

The province is fully served with telephone services provided by PLDT making it at 100% coverage. A total of 213,048 had been installed province wide, making a telephone density of 6.6 for every 100 persons for the year under review.

In terms of electronic services, the province has nine (9) Internet Service Provider (ISP) facilities mostly located in the cities of Dagupan and San Carlos. In addition, numerous Internet Cafés installed provincewide are likewise providing internet services to the public.

In disposing of solid wastes, there were six (6) LGUs using open dumpsite and four (4) use Sanitary Landfill Facility, namely: Bolinao, Calasiao, Alaminos City, and Sta. Maria. The Municipality of Sto.Tomas is the only LGU that has no dumpsite, but has MRF in all its barangays.

From the total number of barangays in the province (1,364), only 721 or 52.86% have Material Recovery Facilities (MRF), which is far behind the standard of 1 MRF for every barangay. In addition, thirty-four (34) Central MRF are established in some local government units in the province, which are funded by the National Solid Waste Management Commission (NSWMC), while 21 are LGU-initiated. On the other hand, there are 16 LGUs who are 100% compliant in the establishment of MRF in every barangay. These are the municipalities of Agno, Bolinao, Mabini, Sual, Bugallon, Pozorrubio, Villasis, Asingan, Sto.Tomas, Natividad, Rosales, San Quintin, Bautista, San Nicolas, Umingan and city of Urdaneta.

Among the forty-eight (48) cities/municipalities of the province, forty-one (41) have existing slaughterhouse, which shows that seven (7) or 15% of the total number of local government units have no slaughterhouse.

Based from the Philippine Ports Authority (PPA) 2020 data, the province has six (6) registered ports, of which, five (5) are temporary/non-commercial ports, which handle their own cargoes/products, and the Sual Government Port that handles commercial cargoes, but can only accommodate small vessels at present.

Shipcalls is the number of vessels which call or arrive at a particular port at any given time. In the province, there were 246 domestic and foreign shipcalls that were recorded at the various ports and anchorages. More than half of which, or 158 vessels were reported to have called/arrived at the Team Sual Corporation, 33 at Pryce Gas Inc. and 29 at the Sual Government Port.

The total volume of cargo discharged and loaded is 2,782,549 metric tons in 2020. Bulk of which is from Team Sual Corporation with 2,531,475 metric tons, while the rest are from the Pryce Gases, Inc., Macroserve Mining, Inc., and Sual Government Port.